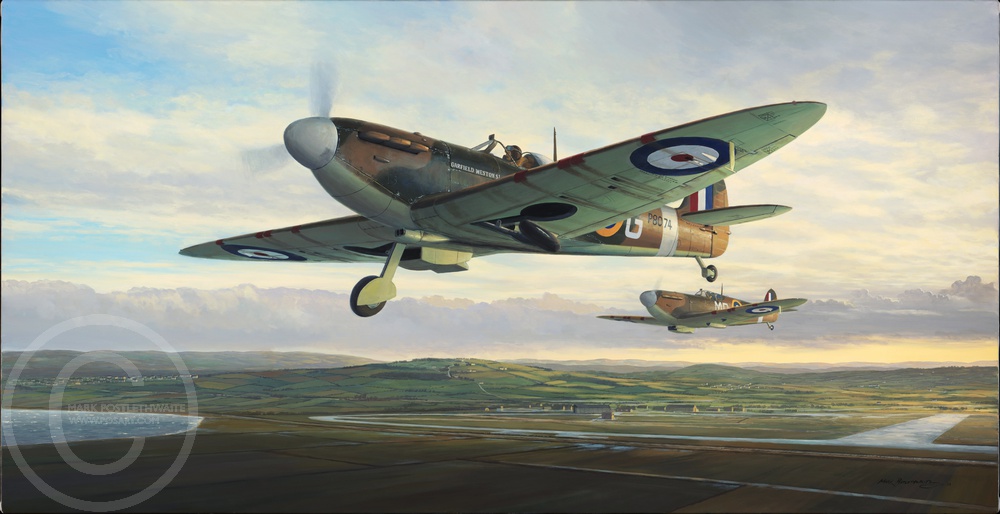 The 'Garfield Weston SI' Spitfire takes off from RAF Eglinton in Northern Ireland, piloted by Plt Off Roland 'Bud' Wolfe, of Cresco, Nebraska.

Named after Canadian industrialist and British Member of Parliament W. Garfield Weston, a member of the wartime government led by Winston Churchill, the story surrounding this presentation Spitfire is truly remarkable.  In August 1940, after the loss of 16 RAF Spitfire and Hurricane fighter planes in one day at the height of the Battle of Britain, Weston walked into the Ministry of Aircraft Production and handed fellow Canadian Lord Beaverbrook a blank cheque, saying "I can't replace the men, but I'll replace the machines.  Beaverbook filled in the amount for £100,000 the cost of replacing the 16 downed fighter aircraft.  The donation was widely publicized and helped inspire the creation of hundreds of local Spitfire Funds across Great Britain and the Commonwealth, raising millions of dollars and pounds. The Garfield Weston S MK.IIa P8074, was first taken on charge at Colerne in February 1941 and soon allotted to 222 (Natal) Squadron, based at Coltishall, where it flew coastal patrols.  The Spitfire was eventually handed over to 133 (Eagle) Squadron at Eglinton.

On 30th November, Plt Off Wolfe, on a familiarity flight escorting convoys, radioed RAF Eglinton that he had a coolant leak and was bailing out at 25,000 feet.  Wolfe parachuted safely but his plane crashed into a bog in County Donegal, Ireland.  Wolfe was captured by the neutral Irish and interned.  In June 2011, the crash site of the Garfield Weston SI was re-discovered during the filming of the BBC television series DigWW2.  After overcoming the logistics of digging six meters down with heavy machinery in a highlands bog, much of the badly damaged plane was recovered, including six of the Spitfire's eight Browning .303 machine guns, still in working order.

Mr. W. Galen Weston, Chairman of George Weston Limited, Canada, and youngest son of W. Garfield Weston, commissioned the painting in honour of his father and the pilots of the Royal Air Force and Royal Canadian Air Force.