About the artist - Mark Postlethwaite

Born in Leicestershire, England in 1964 , like many of his friends, Mark had only one ambition during his school years, and that was to fly fast jets with the RAF. At the age of 13 he was devastated to discover that his eyesight was less than perfect and therefore unsuitable for military flying. This discovery completely knocked him for six and it took him years to decide what else he wanted to do with his life. Eventually after leaving school at 16 and working for the Co-op for two years , Mark managed to get a job in photography, thanks mainly to a portfolio he had built up whilst working on a free local newspaper.

Photography soon became a good outlet for his inborn creativity and during his 10 years in the business he worked in most aspects of professional photography in London, Leicester and Nottingham, shooting everything from cat food to lingerie, I preferred the latter! he says. Mark started to paint aircraft on canvas at the age of 17 as a hobby. A lifelong interest in flying and aviation history together with his professional knowledge of light through his career as a photographer, soon combined to produce work of the highest standards in this exacting field. In 1987, he became the first ever Artist in residence at the Royal Air Force Museum, Hendon in what was the first major exhibition of his work.

At the age of 27, Mark was elected to become the youngest Full Member of the Guild of Aviation Artists and shortly after, left photography to make a full time profession in aviation art. His knowledge of his subject was put to the test only a month after when he competed in and won the TV quiz show The $64,000 Question answering questions on the Battle of Britain. His work so impressed the host Bob Monkhouse that he bought one of Mark’s originals there and then.

Around this time, Mark was contacted by the Chairman of 30 Squadron Association RAF with a view to commissioning him to paint a 75th anniversary painting for the Squadron. He drove down to their base at RAF Lyneham and for the first time came into contact with the life that he had so wanted as a schoolboy. “The first thing that struck me was why I hadn’t considered joining the RAF in a different trade apart from flying” , Mark reflects, It honestly just never crossed my mind at the time, it was either flying or nothing.

The subsequent painting was received with great acclaim within the RAF and soon commissions were rolling in on a regular basis from various Squadrons including a three year association with the world famous RAF Aerobatic Team The Red Arrows.

On top of this, and more importantly for Mark, the Squadrons were offering him the chance to fly with them as part of the research process. By 1995, he had built up many hours of military flying in types such as the Hercules, VC10, Gazelle and Tucano in the UK, Germany and Cyprus. However, his boyhood ambition of flying in a fast jet still eluded him.

Then, on a grey autumn afternoon in 1996, Mark found himself sitting in a BAe Hawk of 208 Sqn at RAF Valley in North Wales ready for take off. An hour later after a thoroughly uncomfortable but exhilarating tail chase 20,000 ft above Snowdon, his feet touched the ground once more and he realised that that boyhood ambition had been finally achieved, in the most unexpected way possible.

He flew again in a Hawk a few months later and then the following year he topped all of this by spending an hour at low level in a Harrier, “the most incredible experience of my life” he reflects “finished off with the famous Harrier bow, when the aircraft hovers above the ground and dips its nose towards the crowd”.

As a boy I used to marvel at seeing the Harrier perform this trick at airshows, I never ever dreamed that one day I would be in the cockpit looking back.

Understandably, Mark thought that that experience would mark the peak of his flying ‘career’ but in 2010, he flew down to New Zealand to take up Oscar winning film director Sir Peter Jackson’s kind invitation to ‘come and fly in his WW1 aircraft’.  Having flown down with his wife Asia on the Airbus A380, the contrast when climbing aboard the Be2f was quite remarkable! After the flight which was accompanied in the air by an Se5a, Mark then clambered aboard the Fe2b in the exposed gunner’s position for a truly unforgettable flight, this time being stalked by a Pfalz for ‘the full effect’.

Climbing aboard and ‘strapping in’ to the Fe2b’s seatless gunner’s position.

In the last 20 years, Mark has become firmly established as one of the world’s leading aviation artists with many of his limited editions now only available on the secondary market and his larger originals now regularly selling for over £10,000.

In 2004 Mark was approached by Osprey to take over from Ian Wyllie to paint all of their aviation book covers. Since then he has completed over 100 covers in three major and very popular series, thus ensuring that his work is seen in bookshops around the world.

In 2002 the first book of his paintings ‘War in the Air’ was published by Crowood Press, providing Mark with another one of those lifetime ambitions fulfilled. The second volume was published in summer 2012. 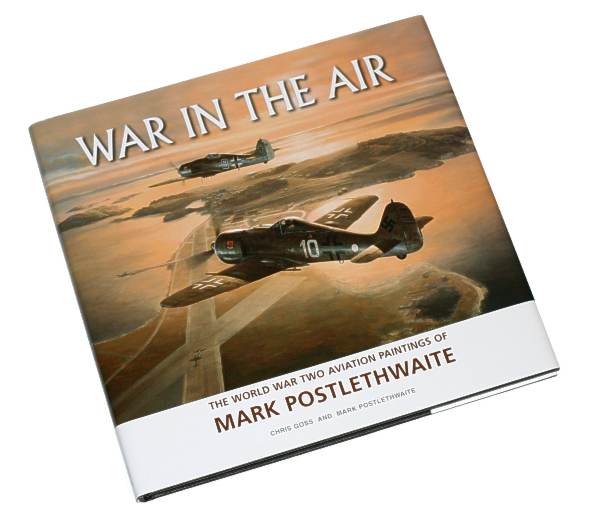 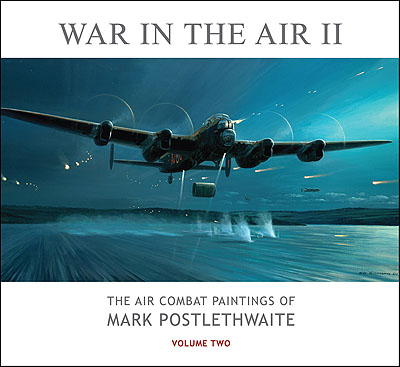 He is basically self taught, and developed a style, when younger, based on his favourite artists of the time Frank Wootton, Michael Turner and the Airfix box art genius Roy Cross. Over the years his work has developed its own style and is now as recognisable as that of his boyhood idols.

He works exclusively in acrylic on canvas and board and is probably one of UK’s foremost exponents of this modern paint. An easy medium to learn but a very difficult medium to master, Mark’s acrylic paintings are nearly always mistaken for oil paintings due to the richness and thickness of paint he uses.

Although there are many and varied reasons for using acrylics rather than oils, the principal benefit is that within minutes of finishing the painting the paint is completely dry. As most of my professional work has very tight deadlines, especially the Norwegian works, I know that I can roll up a canvas and put it in my bag and board an aircraft for Norway within literally minutes of completing the finishing touches. This is just impossible with oils.

He has a vast library of books and models and is also the founder of ww2images.com a WW2 internet photo library, which was launched in August 2000. (He used his extensive knowledge to write all of the thousands of captions therein). The library also contains a lot of his WW2 paintings and the whole thing is specifically designed to become a high tech source of information for today’s generation to learn about the sacrifices of their 1940’s contemporaries.

The fast jet flying, apart from being great fun, also has a very real use.

It is absolutely vital for any military artist to be able to visualise well and accurately. Obviously, most things we paint we cannot do from life and with aviation even more so. Therefore we have to instinctively know what is right. This takes years of experience and research especially with painting air combat. Having flown a few tail chases (mock dogfights) with the RAF, one gets subconsciously a very accurate idea of the size, attitudes and positioning of aircraft in combat.This would be very difficult to achieve accurately without the flying experience.

I also try to paint what you actually see when you’re flying. When in tight formation with another aircraft, you only get an impression of panel lines and rivets, you don’t sit there counting the whole lot of them. The main thing you do notice ironically is the pilot moving around. Most of us aviation artists tend to paint him behind a mass of reflection but in reality you really can see the colour of his eyes!

I’ve also noticed how difficult it is to positively identify aircraft with national markings even at reasonably close distances. When you’re flying you tend to see other aircraft as light and shade and this is what I try to show in my work. I certainly have great admiration and respect for all veteran pilots who had to make split second decisions as to who to shoot at in the heat of battle, I’m not at all surprised that mistakes were sometimes made.

Quite apart from this, Mark has found further reason to admire his boyhood heroes, “Flying in (simulated) combat at speed must be one of the most exhausting things I’ve ever done” Mark says, “When you consider that the young men of Fighter Command went up four or five times a day and literally flew for their lives in this exhausting aerial arena , I would suggest that they were fitter both mentally and physically than most of our sporting ‘heroes’ of today. In many ways I now hold them in even greater esteem than I did when I was a schoolboy and I still can’t get over the fact that I’m now able to meet and hear the stories first hand of all of my boyhood heroes.

The principal element in all of Mark’s work is handling of light. Having spent 10 years in photography, he developed an enormous appreciation of the positioning, colouring and diffusion of light sources. This is clearly evident in his paintings.

I love studying light and its associated tricks and nuances. As a photographer, when you have to make a plate of cat food look interesting, you realise that the only answer lies in the lighting! You soon learn that you can add colour, texture and mood all through the careful manipulation of light. When it comes to painting, the same rules apply and, historical accuracy permitting, the artist should use every trick he can to suggest the mood of the moment.

The biggest factor for which Mark’s work is known around the world is his attention to historical accuracy. Having studied aviation all of his life and written books on the subject, he knows his subject and never uses ‘artistic licence’ when painting historical scenes.

I just think that it’s disrespectful to the airmen we paint if we don’t strive to capture the moment exactly as it appeared when it took place. Sometimes this can make the painting far more difficult, especially with regard to weather conditions and markings, but I just don’t see the point in painting a ‘nearly accurate’ painting!

Mark married his Polish wife Asia in 1997 after a chance meeting on a train 2 years previously. The couple now have two children, Kasia (20) and Szymek (13) and split their time between their houses in Wroclaw in south west Poland and Enderby, Leicestershire.