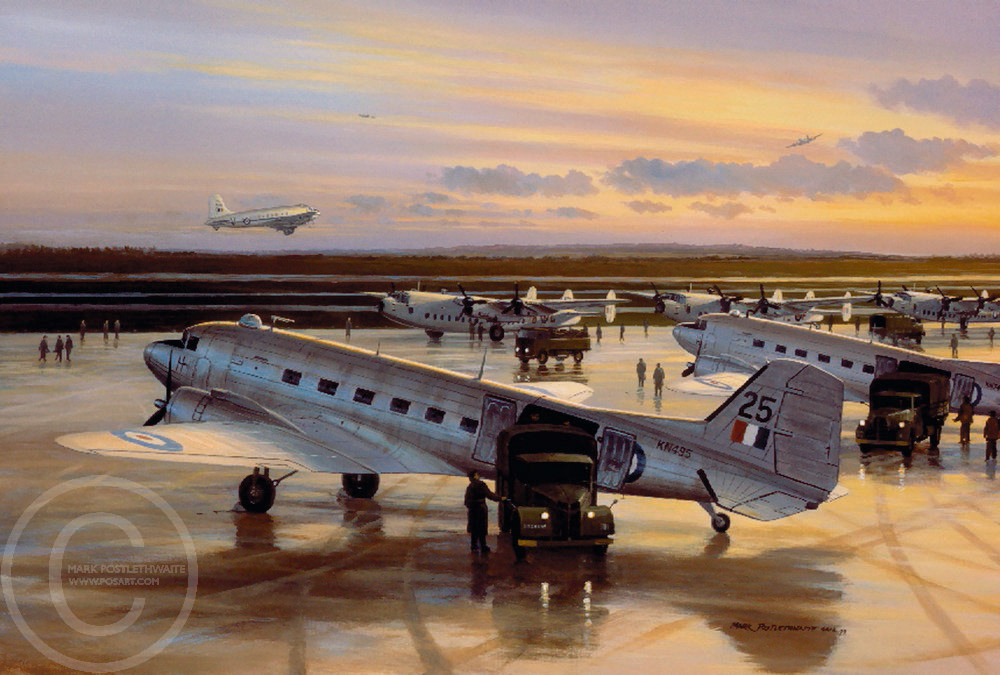 Dakotas and Yorks at RAF Gatow, Winter 1948 during the Berlin Airlift. Each print is personally signed by the Artist and three Berlin Airlift Veterans;

Enlisted in the RAFVR in 1941 and trained with the American Navy on Catalinas. Returned to UK in 1943 and was posted to 624 Squadron in the Middle East flying Stirlings on Special Duties. Continued Special Operations with his next posting, flying Halifaxes with 148 Squadron over the Balkans. Ended the war flying Liberators back in the Middle East. Converted to Dakotas back in the UK and joined 30 Squadron to take part in the Berlin Airlift. Flew a total of 230 trips during Operation Plainfare operating initially out of Buckeburg, then Wunstorf and Lubek. Went on to become O/C of a Thor Missile Squadron in Yorkshire before retiring from the RAF in 1966.

Enlisted in 1943 Trained in America and the Isle of Man. Posted to 238 Squadron flying Dakotas from Abingdon. Detached to Vienna flying the Balkan routes before returning to the UK to join 30 Squadron to take part in the Berlin Airlift. Flew a total of 266 trips during Operation Plainfare again from Buckeburg, Wunstorf and Lubek. Went on to various postings in the UK and around the world including flying VIPs out of Changi and being O/C 115 Squadron flying the Varsity out of RAF Northolt. Retired from the RAF in 1974.

Enlisted in 1943 as a Wireless Operator/ Air Gunner. Posted to 271 Squadron and then to 77 Squadron flying Dakotas during the Berlin Airlift. Flew a total of 250 trips during Operation Plainfare operating from Wunstorf, Fassberg and Lübek. Subsequently flew with 30 Squadron and the Queens Flight before becoming an Air Electronics Officer and instructing for many years at the OCU, Brize Norton. Served in a variety of aircraft including the Valetta, Hastings and Belfast and ended his 37 years of service in 1980 flying the VC10.